An Introduction of me

Hi Everyone My name is Tim Trivizas and I have Dyspraxia. I was Diagnosed at age 5. at that time I did not know what it really was other than a label attached.  Throughout school I was good in class well behaved but my grades did not show that in the exams was constantly failing them due to the memory problems it effected both primary and secondary school. even with the amount of revision put in nothing would come out on the paper. when I left primary School I left with below average grades which made me destined not to do well at secondary school. I came out of my shell at secondary school a bit. I made a friend who is still my friend now although he moved schools during year 7. I had a lot learn at secondary school I did not really fit in to well. I was bullied some of the time it was mainly name calling but it was still wrong.  In year 7 I went to music and during one of my lessons I heard this noise and I lit up instantly asked my teacher what it was he said it was the saxophone. I went and met the teacher. He was American called Mr Lloyd played the Sax like no other. Although I had dyspraxia he didn’t mind he was pretty chill and took time to teach me. I realised my confidence grew every time I played and got better. I found my calling point Music. This did help with fine motor skills and memory. It also boosted my confidence both on stage.  fast forward a few years later 3 years of college and 2 years of uni and can you guess I still love music but better off I got bitten by the music Tech bug Im now a self Employed sound engineer working on film and TV.  I guess this is me signing off. 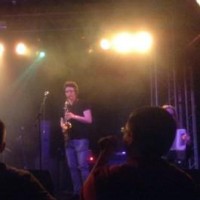